Early on in Prime Video’s The Terminal ListChris Pratt’s Navy SEAL character James Reece is described as someone who’s “built to take a kick to the head.” Those words could easily describe this series, too — although maybe it’s taken a few too many kicks to the head already. A brutally violent and deadly serious military drama-slash-revenge thriller, The Terminal List (premiering this Friday; I’ve seen the first three episodes) is like The Fugitive meets SEAL-Team meets a “Don’t Tread on Me” truck decal, with all of the delicacy and nuance that implies. It’s punishingly grim and hopelessly boneheaded… but at least it’s something new for the Amazon algorithm to recommend to your dad after he’s done watching Jack Ryan and Reacher. 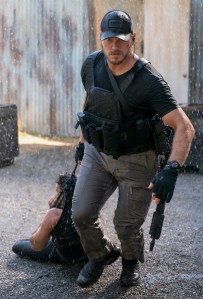 Pratt’s Reece is a Navy SEAL commander whose entire platoon gets wiped out in an ambush that ends with a chaotic gunfight in an underground tunnel. A shattered Reece vows revenge on the faceless terrorist leader he holds responsible — I think his name is “Haqqani”? Does it even matter? — while the US military brass investigates what went wrong. But Reece’s hazy memories don’t match the evidence, and he starts to suspect a deep-rooted conspiracy is targeting him for knowing too much. He puts together a list of enemies to wipe out, Arya Stark-style… but can he even trust his own mind?

It’s a pretty basic setup for a paranoid conspiracy thriller, but the scripts from showrunner David DiGilio (Strange Angel, Crossbones) — based on the Jack Carr novel — are woefully short on actual thrills. In their place, we’re served up huge helpings of red-meat masculinity, hardheaded jingoism and heavy-handed symbolism. (Oh, and lots and lots of American flags.) The dialogue is generic, but it’s also besides the point; it’s just a way to move us along to the next action scene. And those action scenes aren’t even all that great!

The Terminal List‘s plot challenges logic, if you stop to think about it for even a minute, but it confidently shoves its way past any such concerns. It’s utterly humorless, too, punctuated by crude bursts of graphic violence. Even those aren’t effective, though: The action is bloody but not exciting, and the story is bewildering but not interesting. In between, we get saccharine family scenes and a paint-by-numbers conspiracy that gets more complicated but not any more compelling. 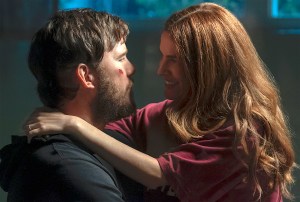 The cast is talented, to be sure, but they’re just going through the motions here. Pratt, so lively and goofy as Andy Dwyer on Parks and Recreation, is stoic to the point of constipation as Reece. Constance Wu has to unload a lot of exposition as nosy reporter Katie, and Taylor Kitsch has great tattoos, at least, as Reece’s military buddy Ben Edwards. It’s sad to see a gifted and versatile actress like Riley Keough stuck playing Reece’s blandly supportive military wife Lauren. It’s also hard to take Sean Gunn, aka Gilmore Girls‘Kirk, at all seriously as a slimy corporate executive who ends up on Reece’s hit list.

There’s certainly room on TV for a pulse-pounding, thought-provoking conspiracy thriller with lots of action and intrigue — but in the case of The Terminal Listthat mission gets badly botched.

THE TVLINE BOTTOM LINE: Save yourself some time and delete Prime Video’s brawny, boneheaded military drama The Terminal List from your watch list.